This is not new, but I often feel that the line between 'being confrontational' and 'being a pushover' really tricky. Mostly it seems that it goes like this:

Carmen is a sensitive mare with a strong will and a total lack of trust that things will be okay.

Okay, so that sounds dire. It really isn't.

We're making progress and I find myself having to figure this whole relaxation thing out. If I just wanted her to do what she was told it would, in some ways, be less of struggle.

That winter has settled in and riding is sporadic at best is not helping.

I am determined that we will tackle this whole relax and be supple thing.  It is a process goal.

Today I had a lesson that really tested my resolve. Earlier in the day we could hear ATVs and a chain saw. I believe a family was cutting a Christmas tree. Although they were long gone when I took Carmen up to the ring she was convinced it was a death trap. I was able to get her relaxed and when I mounted she was calm. But she was also pretty clear about where she was going to go in the ring.

Shanea was talking me through keeping my leg on and getting her over but she was a brick wall. Which of course made me try harder and that led to my leg going back. I was getting frustrated because Shanea kept telling me to keep my leg there so she would bend around it and Carmen was telling me to fuck off.

I was working really hard at not grabbing her face, not letting her run, getting her to bend and staying in the saddle and it simply was not working. I finally had to stop and say to Shanea "Look, I know what you're saying and I'm trying. But no matter what my leg does she refuses to listen so telling me to keep it straight is not working". I know that she was trying to help but it felt like I was drowning and someone was standing on the side of the pool saying 'just move your arms, kick your legs and float'.

In case you think I'm exaggerating:


I didn't feel in danger. But running into the 'nope' was driving me nutty and I really had to fight my desire to just boot her and haul on the inside rein. I did pick up my crop to tap her on the shoulder she was driving against me. Fortunately I had Shanea to help stick with it.

Slowly, millimetre by millimetre we were able to get in tune. It was hard. And took constant focus. I had to be there and ride her like she was being perfect.

But we did get there. I was able to access her back and get her reaching for the bit. 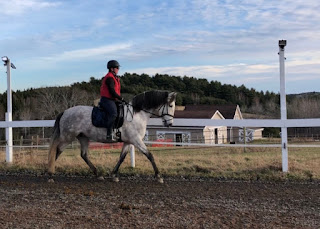 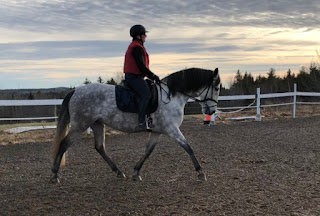 Those are screen shots which are, clearly, cherry picked. I have a ton of video, but I won't bore you with a long clip. Here's a short one of where we ended up:


I think if I had been riding alone I think I would have given up and either dismounted or fell into arguing. I was happy that Shanea was there to help me stick it out.
Posted by TeresaA at 9:01 PM