Clinic Adventures: That Time I Tried to Steal a Trailer

This weekend I was off auditing a Cindy Ishoy clinic. I was really looking forward to it. Not only was I going to hang out with my horse friends and learn a lot but I was getting a weekend away. I really needed a break after the last 3 weeks of endless rain and crazy work.

Shanea had signed up to bring her mare and I was excited to see them go. I didn't arrive until noon on Saturday (I wanted to ride first). When I got there I found out that Shanea was having trouble getting here. The trailer that she had lined up had been damaged in a recent wind storm. People were trying to figure out a solution but it sounded confusing.

So I called Shanea and she said that she had found a trailer but needed a truck. Paula and I spoke and she got a truck (Susan volunteered her dually). Next was to get a ball. Paula got that and we jumped into the trailer on our rescue mission.

When we got to the farm where the trailer was we saw two trailers but no one was there. I called Shanea and she thought that it was the white one. I looked at both and the gray one had a lock on it.
So Paula and I decided to risk taking the white one.

Paula was nervous to back up so I backed the truck up while waved her hand to direct me. Paula is small and the truck was tall so all I saw was her arm. Clearly she trusts me.

Alas, when we got everything aligned it turned out that the ball was too large.

So that's how I ended up NOT stealing a trailer.

Fortunately though Shanea still got her lesson. Cindy agreed to travel to Julia's arena (who kindly offered it up for Shanea).

The moral of the story? How about: 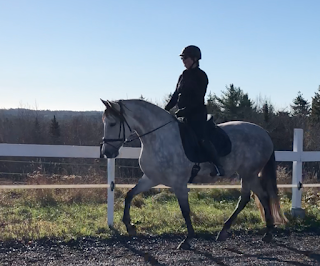