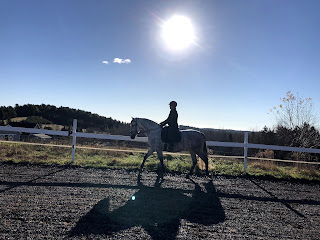 It is so easy to doubt yourself. Especially if you are an AA like me. I know that things are getting better but it's still easy to think that it's random and not because of what I'm doing. Carmen often seems like a complicated horse. And lets' face it- I am a great over thinker. I worry that I don't have the skills to help her be the horse that I know she can be. Sometimes she feels more dragon than horse:

So starting her on her ulcer meds and obsessing over her every mood keeping a close eye on her behaviour was a bit fraught for me. Was she getting better or was it a placebo effect? When I determined that she was in fact, more relaxed and easy going I then tortured myself with the question of whether it was the medication or that I wasn't on her back hardly at all.

Then there was her residual behaviour in the ring. Troll corner had not only returned, it had quadrupled in size to include P through H (if you were on the right rein). I've been chipping away at it from the ground and under saddle.


I had also reached out to Nikki and Mike (the ones who do the obstacle clinics) for help. Unfortunately their schedule didn't allow for them to come to me but I gave  Nikki a bunch of info and then she called and did a consult with me over the phone. She recommends that I take a ground exercise to under saddle. The idea is when I mount ask her to do a small circle around my inside leg. when she was calm and quiet move out gradually. I was to return to this exercise when she got tense and even go back to where she felt 'safe' until she calmed again. The idea was to teach her that my inside leg coming on means 'hey, I'm here, come back to me' and eventually not need the circle at all.

I had a lesson today with Shanea and I told her about this and we incorporated it into the lesson. When I mounted I asked to walk a 10 m circle and then away. As soon as she tightened we went back to the exercise. Spoiler alert: it really worked. As the lesson progressed I often just had to put my inside leg on and ask her to bend and she settled right back to me

Here we are trotting down towards the far end and you can see us having a conversation about it:

Is it pretty? Not really. But hey, there's no wild flailing, bolting or spinning. Instead it was more like are you sure?
yes
are you REALLY sure?
yes
Well okay then

And I didn't have to do a ton of work before this video to get this result.

Shanea set up some poles and cones for us. It was fun and useful. It gave Carmen something to focus on -i.e., trip hazards. A couple times she knocked the canaletti but I was okay with that because it happened while she was looking around at other things. Hitting the poles reminded her to watch her feet not the horizon.


She got better and better: Look at us trotting a circle down in the part of the ring where I couldn't even get her to walk 2 weeks ago:

I don't know if you can see it but I'm putting my inside leg on and she's bending and stepping into the outside rein.

What I loved was her interest and curiosity about what we were doing. Not that she didn't have opinions (Spanish Mare after all) but they were fleeting and we worked through it. It was lovely to feel us working together rather than like I was banging on a door while she turned out the lights and hid behind the sofa:

The few spooks she gave were minor and I just sat up and relaxed my seat and was totally not worried. I was a bit worried about her speed and Shanea told me to let go and trust her. I did the best I could.

Shanea reminded me to keep my shoulders up and back to steady her over the poles. After trotting both ways over the poles and a brief break we picked up a canter. We started on the left lead and Shanea set up a grid of 1 pole, then 2, then 1.

The first few times through Carmen struggled with the 2 so took it away so that it was just one. And then this happened:


Carmen:  What the hell? Where'd that pole go?!

I don't know if you can hear me but I am giggling like a 12 year old. She wasn't being spooky or bad, just surprised and needed to think about this.

Let's take a closer look at this:

It was harder for her on the right rein....

But hey, we have auto changes. That's a good thing, right?

Shanea told me that I need to sit up and encourage her to use her hind end rather then trailing it out behind. By now we're both a bit tired but we tried.


We finished with a few trot-canter-trot transitions on a circle down by the 'scary end'. She was a bit spooky at first but settled quickly.

It was a great way to end the lesson. Carmen was so very very good- more like her 'old' self. Did I mention that she had had the last 3 days off? The medication ends this week and I am going to monitor her closely to make sure we don't go backwards.

Clearly she doesn't hate the ring or the work. She was in pain and it affected how she felt about the work. Then when the pain left she still had that expectation that work = discomfort. I think we're chipping away at that. This ride was FUN. And not just for me- she seemed to be enjoying it too. She was forward and in the bridle with very little backwards energy.