As you may recall Carmen and I headed off to a show this weekend. I was looking forward to it : many of my friends were going and it was a place Carmen and I had never been. Because we had no history it seemed like a great place for us to see how we were doing.

We arrived early Friday afternoon and I settled Carmen in her stall. The layout of the grounds was great: the barns, warm up ring and show ring were all close together. Everything is so convenient.
I walked her about so that she could see everything and she was totally chill. I made sure that in the warm up ring I let her check out the fence against the tree line. She didn't care and happily ate the grass. Later when I tacked her up and mounted she decided that she probably should be worried about those trees but I was 'you were fine 20 minutes ago with those trees so I'm not buying that you are scared now'. I just rode her forward and she became fine again.

The warm up ring became a bit full as other competitors came in so I made my way over the show ring (we were allowed to ride in it the night before). She immediately relaxed. I swear that she recognized that it was the show ring and was all 'I know what to do here'.  Carmen was a bit confused about the trailer at the end (for the judge).
Carmen: do I go in? I think you should duck then
Me: 'no, it's okay, just take a look at it.
Carmen: 'ooookay.... I looked, now what?

We rode about 20 minutes and I dismounted.

The next day my rides were to be at 10:24 and 10:59. I figured to be on her by 9:45. She was a bit stiff in the warm up but slowly came out of it. Later I figured out that she was in heat but at first I wasn't sure what was going on. However, we warmed up and she was doing well. Even Jane (you remember Jane or 'my yoda' as I call her) commented that we looked good. Then it turned out that the rides were behind and in the end I started my first test at the time I was to start my second. We were definitely over warmed up given the heat and humidity. I find it hard to keep Carmen  soft and warmed up without getting her tired or thinking that she's done.

Anyway we went in and I walked around, making sure that she saw that there were now people in the trailer. Carmen found this curious but in a 'humans are weird' way not an 'oh my god are they armed?' way. I struggled a bit with her bend but over-all I was pleased with how we went. Our final score (I learned later) was 62. 96 with scores ranging from 5.5 to 7. Mostly what hurt our score was our lengthens. I really need to get on those.

After the steward's inspection I put her quickly in her stall to have a pee and a drink. I was pleasantly surprised to see that Karen came to watch us. It was wonderful to see her. I got Carmen ready again and went out to find out that we were on deck. Eek. The times were so mixed up I had no idea. Anyway I hopped on her and we went in to the show ring. I did a few quick walk-trot-canter transitions and the judge rang the bell. I squared my shoulders, picked up the trot and in we went. I say that because our entrance and halt at X earned us a 9! I've never gotten a 9 before. Carmen felt tired but she tried her heart out for me and we ended with a score of 64.219.

When it was time for the ribbons I had earned a 3 and 4th. I was a little curious about the 4th and went to check the board. That's when I saw that they had me down with a score of 57. I went and got my sheet and showed them the error. I honestly didn't care about the ribbon but I did care about the score. I haven't made a score below 60 yet this year and if I have one recorded for me I want it because I actually earned it not due to error. I felt bad and the show crew were very apologetic and got me my proper ribbon (third) and fixed the score.

That night I had reviewed my tests and wanted to improve my scores. The morning dawned misty and cloudy. Around 8 it started to pour buckets. It sucks to show in the rain but what are you going to do? Scratch? Not me.

While  I was braiding her I overheard Jane talking to another person who voiced what I was thinking. And she said something so incredibly wise. I won't get it all verbatim but the idea was that riding is the one sport that the moment you decide to try really hard is the moment that it all goes to shit. She said that if you wanted to do better you had to be softer. Riding is not like running, it's like yoga.  This immediately resonated with me and it helped me make a plan. Essentially, my plan was to focus on bending being soft. To stop trying to hold Carmen and to let her go.

Just as I was tacking up the rain stopped.
I was also determined to not ride for so long in the warm up again so I double checked the ride times. We were pretty much running on time and I had opted for a 30 minute warm up. I figured if she was hot I would just deal. Carmen started off really behind the leg (it was the morning cleaning out her stall that I realized she was in heat. I blame the cute gelding name Vinny who kept flirting with her. She was just as flirty back). I actually dug my heels in and told her to get going. She leapt forward into canter and I gave the rein and urged her on. I don't know which one of us was more surprised by that.
Carmen: Wait, we NEVER do this!
Me: I know!

I rode her into the test and it felt wonderful. Not perfect but it really felt that we were working together to the best of our ability. And it showed in our score: 64.815. Which was a full 2 percentage points higher then Saturday. I was thrilled. And we won the class so that was cool.

I had just enough time to put Carmen back in the stall to give her a chance to pee but she didn't. I think it's because I left the saddle on but there wasn't time. I had a few minutes to warm up for our next test and we went in. It was a bit of a struggle. But I didn't push her. I asked her to try and she did. Frankly  I think she was just out of steam. It didn't feel balky to me - it truly felt that she was giving me what she had. The score was 60.938 which felt a bit harsh. We netted third again.

But the judge did her job and I'm not going to argue. Judges score how they score and we can't expect them to all be the same.

Nevertheless  I was thrilled with our show. Not because of (or even in spite of the scores). But because we had an entire show with no shenanigans. Not one spook or evasion or argument. I never felt at risk or frustrated.

I let go and let Carmen do her thing and she did it with style.

The rest will come.

In the meantime let's celebrate. Drinks are on me. 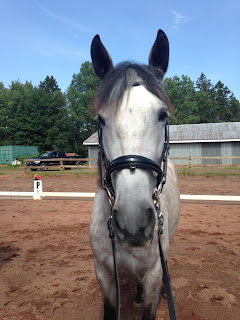