Carmen's mellowness is continuing and while I am enjoying it I am also struggling to figure how to ride her.

I have skills to ride spooky Carmen, zoomy Carmen and even resistant Carmen.

But lazy, Zen Carmen is confounding me. Don't get me wrong - I have ridden lazy horses and I know how to ride them. However, I don't want to teach Carmen that her mellowness is wrong. Getting after her seems to be not quite the right thing. So instead I am trying to build her forward out of the mellowness. It sounds good but I am really just making it up as I go along.

So the lesson I had today was perfectly timed. When Shanea arrived we were just getting into the ring. I explained about how she's been lately- mellow, not-spooky and lazy. As we chatted Carmen stood there looking like she was having a nap.

We started off working on leg yields- first towards the rail and then adding in zig zag lines. It helped me to understand how to use the outside rein for straightness- I have a habit of over bending her and then trying to get her to go sideways. Part of that was to keep her from looking out and then spooking. But I don't need to do that now. 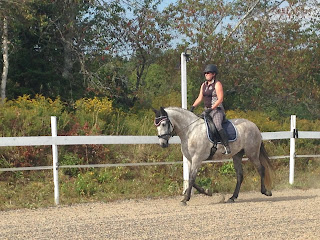 Shanea also set up some trot poles on one side and a single pole on the other.  What I like about Shanea is that she's all about being correct and she insisted that I set her up for the poles about three strides out and then let her go through but I wasn't allowed to be 'floppy'. All of this is true but as Carmen began to use her hind end and lift her back it was a lot of movement. 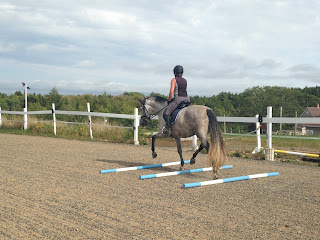 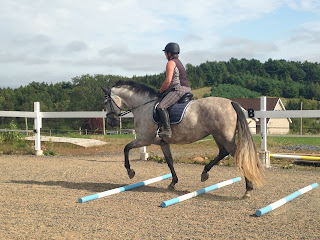 Did I mention it was hot? Carmen and I were sweating. But we weren't done.

Shanea had us pick up a canter and once that was established canter over the single pole. By this point Carmen was forward and energetic. She was also, not spooky excatly, but starting to look around. I just kept riding her forward and worked on keeping her up in the bridle. The nice thing was that she was taking the bit and moving into the bridle.  We then cantered down towards the pole. The first time over I was all look at us- we're JUMPING over the pole. This is so much fun! But what came out was more like 'squeeee'. Shanea laughed at us. We kept practicing coming up. Shanea said that it was cool because at first Carmen was a bit unsure and then her ears came up and she was having fun.

It was a fun lesson. I love working with Mellow Carmen. Part of me is thinking that adding some jumping into our routine would be fun. Not that we'll be doing anything big. At least not on purpose.