Once the poles were dry I moved them up to outside of the ring. We had saved some rubber pallets and I grabbed one to hold them- it worked perfectly.

The first time I rode Carmen I made sure that she saw the poles and had a chance to inspect them. However, she decided that they were a whole other kettle of fish once I was mounted.

In fact she decided that going anywhere near them was not in her job description. In the past I would have been discouraged that, yet again, something was interfering with my training. Instead, I realized that this was an opportunity: given that at the show she was resistant to going to certain places (like anywhere near the evil sunbeam) this was my change to practice getting by such things in a safe location. So we did.

It's also easier to be brave when Cynthia and Irish are in the ring with us.

Princess was not so happy about it but I refused to let myself get drawn into the drama so we were able to work through it. There's no magic- just understanding and persistence.


I don't make her confront the poles but I don't shy away either. But she's starting to realize that I will persist the same as I do on the ground and that my expectations are the same. Carmen started to be calmer and then it started to rain.

Heres's a good time to point out that Carmen used to freak out being ridden in the rain. Whether it was the rain hitting her delicate little booty or the sound of the rain on the leaves and trees or some combination I do not know. But to be honest I had avoided riding in the rain.

But not this time. This time I decided to keep going. It wasn't a cold rain and it wasn't blowing like crazy. Carmen again had her doubts. Especially going by the trees. But I didn't have any doubts and we worked through it. I was quite pleased with her.

The next day when I mounted up we walked around the rail and she walked without hesitation by the poles. Until we got beside them. It was like she suddenly realized 'oh right- those evil things'. She cocked her head at them and slowly (probably so I wouldn't notice) walked 2 steps sideways and then halted, quite pleased with herself. I couldn't help but laugh at her. I gave her a pat and that was it for the poles.

She was so calm and collected through the whole ride. I finished with working on the stretchy trot circle. The first time she didn't stretch too much.  But as I repeated the exercise she seemed to suddenly understand what was asked and stretched out beautifully. I halted her, gave her lots of praise and hopped off. 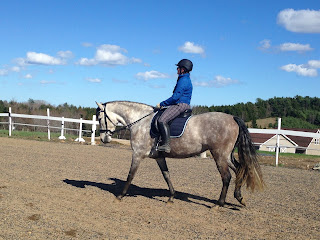 Carmen will probably always be a bit reactive. She's teaching me to be not-reactive but not back away. And she's responding to the discipline. It reminds me of one of the many things that Royce taught me: that you have to be firm and clear. Horses, he told me, don't mind if you're firm as long as it's fair'.

It appears that Carmen agrees with him.
Posted by TeresaA at 7:42 PM