The Princess Tries Out a New Tiara

I would not be described as a 'Tack Ho'. I tend to have one bridle per horse and use it for everything. When I first got Carmen I bought her a bridle. However, this summer it was clear that it was not the best fit for her head. Not that she complained but I wanted to replace it.

I spent this summer trying to find something that appealed to me. When you prefer to be on the bargain side of things this presents some difficulties. Plus I'm fussy. I don't like things over the top but I didn't want really plain either.

Two weeks ago I was killing time on Facebook when an ad popped up for a company called Solo Equine. I clicked on it and was surprised to find out that it was a Canadian site. The website promised quality leather for reasonable prices and a money back guarantee. I liked the photos of the 'Solo Silhouette' bridle and it was on sale for $155.  Acting on impulse I decided to buy it:

As I was paying I realized that this company was just weeks old so I was taking a real chance. It also had 'patent leather' accents and I was worried that I was getting something that would look plastic and cheap.

I needn't have worried. The communication from point of purchase to arrival was excellent. I was messaged when it was ordered, filled, sent (with a tracking number) and two messages that it had been delivered. I knew it arrived when I received a text from Ed "what did you order".

I came home and did my chores first before opening the box. I was so impressed with it right out of the box. The leather was of lovely quality. 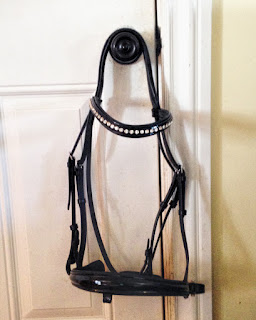 It was still a bit stiff and new so I put it together to see how it looked. I was happy with it- I didn't think that the patent was too much. I thought that Carmen might appreciate the tiara: 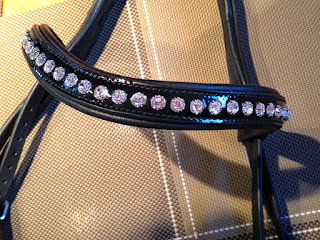 After dinner I headed out to try it on. I didn't add the bit - I just wanted to see if the head pieces fit.

I think that it fits quite well:

Shortly after I took this photo she shook her head her mane popped out. I had to laugh. As you can see the nose band needs to form a bit.

As you can see it comes with a flash attachment but I suspect I will be cutting that holder piece off. 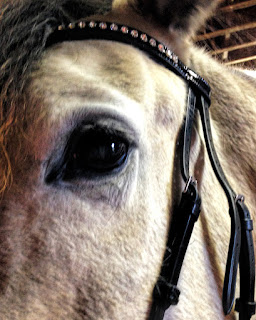 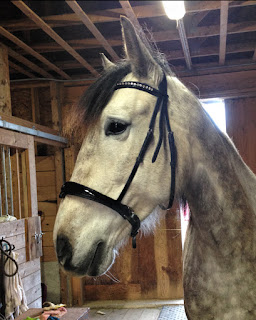 I like how it tapered on the side - it shows off her refined head.

To be honest I liked everything about this bridle, except for the reins. It came with the cotton reins but I will just swap out mine.

I brought it back to the house and conditioned the leather. It's now hanging up and waiting for use. If you are looking for some tack I would suggest that you check out Solo Equine (and no, I'm not getting anything for this post).

Now if I could just get the weather to cooperate....
Posted by TeresaA at 7:06 PM