Irish Gets a Tune Up

"You'd find it easier to be bad than good if you had red hair. People who haven't red hair don't know what trouble is" ~Anne of Green Gables~


Heaven save me from troublesome redheads. Irish has been a bit of a brat lately. Whenever I take Carmen he runs and carries on like he's a 3 year old. Even Ed commented on it when he looked after the horses this week (I was away this week). He told me that at dinner time Carmen just came in her stall and waited while Irish snorted and pranced and generally ran around like a fool. 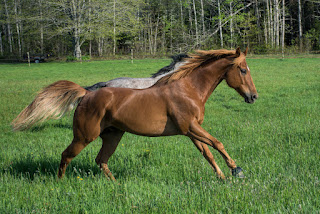 While it does my heart good to see him feeling so lively but it's also a bit annoying. So when I had a chance to have Ashley (Cynthia's daughter) ride him on friday I figured it would do him some good.
I lunged Carmen earlier in the morning but didn't ride because I had to go the Remembrance Day Ceremony.
They arrived later that afternoon and we got the horses ready. Irish had a glint in his eye but was well behaved getting ready. Up in the ring Irish was forward but not connected. I was giving her some tips. Obviously, with his arthritis it's not easy for him to connect over the back and he needs a warm-up before getting it together. He also finds it hard so has a few evasions that he learned over the years. All of them are aimed at convincing his rider that he just.can't.do.it.

*Interesting side note- Whenever I transferred my attention to Irish and Ashley, Carmen stopped being fussy. Sigh. One day I'll get the right mix of attention and calmness.

After watching Ashley struggle I couldn't take it anymore. She was here to have fun, not deal with difficult redheads. I called to Ashley "Do you want to trade horses?"  In a few minutes we were swapping horses and I settled into the saddle.

Irish cocked an ear back. 'uh oh'.
Yup. Just remember you asked for this.

We walked off and Irish was sluggish and behind the leg. He was also greatly interested in the far field, what Carmen was doing and, oh are those birds? What are they doing?

I settled my hands and asked him to trot with a gentle tap of the heel. Nothing. I gave a stronger cue and he shuffled his feet a bit. Okay, I gave a nudge and then a smack with the whip. He leaped forward. We spent the next few minutes remembering that it's easier to go with a small cue. Once he was forward and all 'yes ma'am' I then asked him to connect his front and back. Irish sometimes feels like a slinky toy

Meanwhile, Carmen and Ashley were having a great time. She was a bit spooky but Ashley dealt with it well and they ended up in a happy place. It was fun to sit on Irish again and once I got him together we had some half-decent lengthens across the diagonal. Once he fell in line our transitions were crisp. We finished with a canter serpentine with simple changes and he was totally with it.

Today when I went to ride Carmen I brought Irish in and put him in the barn so he couldn't tear around. Irish can pull off the best expression of injured innocence but I am immune to his witchcraft and left him inside without a qualm.
Irish has always been a character but he's blossomed since coming home and I wouldn't trade him for the world. Except maybe tomorrow. Ask me tomorrow.