On my last post Linda commented that I had found the happy medium between too much control and being safe. I liked how she put it because it made sense to me- Carmen needs to feel support from me but doesn't like too much pressure. Sometimes she requires more pressure to make a point but it can't stay on. I have keeping the idea of a 'happy medium' in my mind for my rides.

On Thursday Carmen was fabulous. She was tuned in and listening and we were able to work on our straightness issue. I tend to sit too much to the left and Carmen tends to throw her haunches in going to the right. The problem with working on it is I can't trust how it feels- because it feels normal to ride over to the left and awkward to straighten up. I just keep correcting it. Carmen and I were having so much fun in the ride that Cynthia even asked if I had given her more of the 'chill' supplement (I hadn't).

Friday was beautiful September day- sunny but not too hot. In the afternoon it became quite windy and that's when Cynthia and I rode. Carmen was much more tense in the ring- wanting to look and freak out about all the wildly waving grass. This was a great time to practice getting the right amount of support. I realized that I wasn't worried about what she 'might do' at all. I was aware but not tight about it. Nor did I stare hard at the same things she was staring at. I would look and then carry on. She kept bulging in her shoulder along the tree side- more outside rein made it worse, with more inside rein and she very happily turned in away from it. My inside leg was getting too tight with trying to help her stay out on the circle.

She was getting tighter and tighter and the trot felt terrible- it was like riding in a wagon over a bumpy road. So I pushed her up into canter and let her reach out and work out some of her kinks. At first the canter was pretty awful- she was so balled up she couldn't go forward and even gave a couple grow hops. I put on my leg and let her have some rein and off we went. It took a good many minutes of canter before I felt her settle into work. With all the work that we've been doing over the summer she's very very fit. She can canter and trot forever and not be out of breath. Did I mention that there was also a helicopter flying around?

Finally she settled and we could work on straightness and suppleness. She was so tight I knew that I had to help her loosen up and now she was ready to tune in to me rather than argue. ( I was also happy that I never argued with her at all, and just stayed pretty calm).  I've been working on leg yields for a while. At the walk they are pretty good now- I can stop her from blowing through the outside shoulder and going crooked. At the trot they are good as long as it is a way she wants to go (like towards the gate). If she's not sure about the way we're going she will either speed up and/or refuse to move over.

Yesterday seemed like a good day to work on this- we started at the walk and when that was pretty good I asked her to trot. As soon as I asked her to move away from my leg she sped up. I realized that she was a bit confused as to what I wanted and I had to figure out how to help her figure it out. Opening the rein to the way I want to go didn't help- she hates that and ducks out. More leg made her go faster and get tight. I finally figured out the timing of inside leg, outside rein, half-halt, repeat. When necessary we dropped back to walk and finished the leg yield. What I didn't allow was for us to zoom to the far end without going sideways at least a few strides. Suddenly she seemed to get it and we were able to get some real trot leg yields (probably a 6 in a First Level test. She can do much better but we'll start there).

I also worked on the 'free walk on a long rein'- now that I feel okay giving her a free rein it was time to help her stretch out. This is fine along the rail but across the diagonal we look drunk.  The trick was to essentially point my pelvis where I wanted to go (say K) and then when the wondered off path give her a gentle bump with the legs. I Think Jane Savoie describes this as making a chute with your legs. I only used a rein aid when I had too. After a bit she figured it out. Interestingly enough she also stopped snatching at the rein.

All our rides with Cynthia end up in a small hack around the fields. This time we went the opposite way. Other then a bit of confusion when we passed the barn (why aren't you getting off), she was fine. Irish wanted to head into the woods so we followed. She was a bit concerned but not too bad. I haven't been brave enough to go on my own yet but I'm getting closer.

I was so happy with both of my last two rides. The first one because she was so calm and the second because she wasn't but we worked through it without too much drama. Earlier this year I had observed how much happier and calmer Carmen was in the barn. That disappeared under saddle but it's not starting to come there as well. I'm no longer feeling a complete lack of trust in me- instead she's tuning in and trying to figure stuff out. 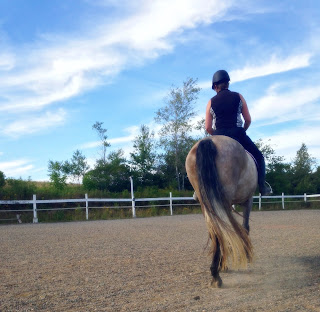