While I am continuing to ride Irish do not worry- I have not been neglecting himself.

Over the past week I worked with Steele in the ring. He's becoming very tuned in and prompt- which is lovely. I had Royce come back this weekend and we did some work with him on saturday and sunday.

On Saturday during the lunging Royce suddenly fell to his news. Both Steele and I were alarmed. Turns out he does this so a horse learns to stop when a rider falls. Not a bad idea at all but hard on the knees I think. After a couple trials Steele would just stop and look at him as though to say 'whatver'
Royce rode him and he was fabulous. I have a video I'll try to upload. I got on to cool him out.

On sunday the saddle fitter was coming back (with a saddle yay!) so we made an appointment for early morning. I fed the horses early and then came in for a coffee before heading back out to the barn. Irish got to go out but not Steele. He was totally miffed about this and did his level best to get it through my thick head that he goes outside in the morning. He does not stay inside. Otherwise Irish will eat all the grass and he's starving.  Especially on the rations I give him. I was firm though and we headed up to the ring to work. At first Steele was highly distractible but soon learned that life is easier when he pays attention. This time Royce fell much more dramatically then before. Steele stopped dead and looked at him and then at me.
Is he okay? Should you call 911?

I think you should try CPR- I can't with my hooves, that wouldn't end well. I can wait for the ambulance down in the pasture.

At which point Royce got up and went back to work.

I rode much more this time. It was interesting. He was far more balanced then before. As we went along I steered him towards the far end of the ring (the spooky spot). He flatly refused to go there. Although 5 minutes ago he spent a lot of time with Rocye with no problem. After a meandering path with many course corrections we made it down there. I did my best to ignore the idea that he was going to run away and guess what? he didn't. I did a lot more trotting this time as well. After a while I only had to squeeze gently and he was trotting off with enthusiasm, albeit the rhythm was a bit inconsistent.  We finished up and I brought him back to the barn and hosed him off.

The Saddle fitter came at noon. I brought Steele in and I could see him thinking but..but..but I already worked today.
We tried the saddle. It seemed good. The gullet was the right one so we didn't have to change it- just alter the padding a bit. I brought him up to the ring and lunged him in it. He was very very sluggish on the lunge. She asked if he was always like that? Nope. I worried that maybe he was stiff from the work. I sat in the saddle and it seemed good to me. She led us around and he didn't mind the saddle and there didn't seem to be any pressure points.  After I let him out again he trotted and cantered down the field looking fresh as a daisy. Sigh. So I guess that the sluggishness was not soreness but more like a kid not wanting to go to school. I rode Irish yesterday (he was fabulous by the way- no yellow VWs in sight) but I couldn't muster up the energy to do it today. Instead I puttered around at some barn chores I had been putting off.

At supper time rather than head back to the house I opened a beer and sat in the barn listening to the horses munch on their dinners. That is one of my favourite sounds. When he was done I went into Steeles stall and gave him a groom and checked for sore spot. None. After I finished he put his head on my shoulder very gently and blew in my ear. We stayed like that for a few minutes.

Life is simple. Just the way I like it. 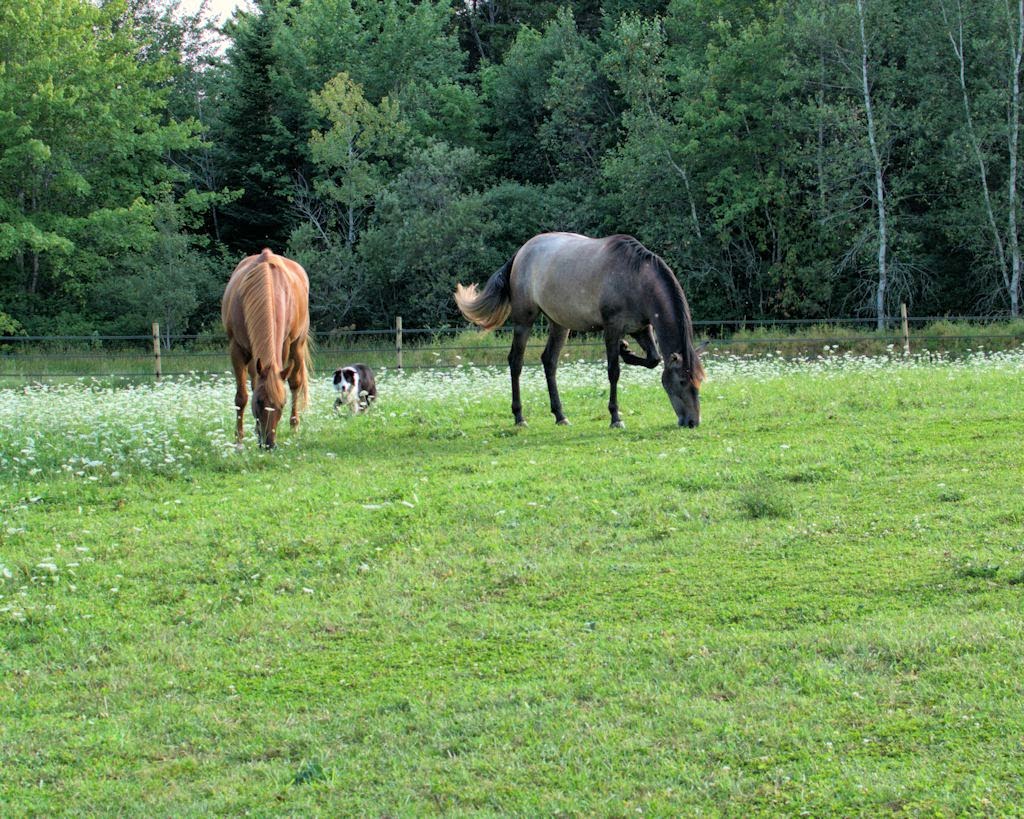