Nothing up my sleeve

Horses have long featured in myth and folklore. That's because they are magic.

You might be rolling your eyes and thinking that I've lost all common sense but bear with me. I promise to not get too transcendental on you. I don't mean magic in the 'poop rainbows and fart butterflies' kind of way. But they are magic nonetheless.

To be honest I can't see any other explanation as to why else we spend so much time, money, sweat and tears on horses. I know that there those who are in horses for the money- that's why so much money and horseflesh is thrown into sports like racing and high end competitions. But there's money in it because of those of us captured by the magic.

I truly believe that for a small proportion of the population it's there from birth. I don't remember not being drawn to horses. My mother tells of me being brought home by neighbours as a preschooler because I was in the horse pasture. I have friends who tell me of their toddlers and young children (often girls but not always) who are fascinated and drawn to horses even though the parents are not.

You can dismiss me as an aberration. But consider the case of Ed.

Ed freely admits that when we first started dating (back in 1985) he knew that I 'loved horses'. But he did not truly appreciate what that meant or how it would impact our lives. For a few years he was quietly supportive. There were times he resented the time and money I spent on it and he waited for me to grow out of it. That never happened. He had a choice: accept that this was part of my life (and therefore his) or leave.

Fast forward to 2011 and we finaly make my dream come true and move to Oakfield Farm. We build a barn, install fences and bring home Irish. In 2012 Steele joins us. Ed is clear. He'll do the farm work but doesn't want a horse or to ride. He'll do the chores if I'm away but has no interest. He shares this belief with others. Of course I don't argue.


There was no big flash. No sudden conversion. Still the horses have slowly been weaving their spell. There were all sorts of indicators:


A few weeks ago I was away and talking to Ed. He was talking about how hard it was to groom the mud off the horses. I silently digested that bit of information.
"you know you don't have to groom them when I'm away?"
"yeah but you said that it helps prevent rain rot if they are groomed regularly"

More silence as it hit me that he was actually listening to this. I was sure that when I talked about the horses all he heard was the Charlie Brown teacher voice of 'wahwahwah'

"oh. Well thanks"
"no problem"

When I got home I found him in the barn putting a new mailbox on a post (our old one didn't survive the winter). Steele was watching avidly from the stall. We chatted a bit, catching up. I saw him struggling to remove the numbers off the top with a hack saw.
"wouldn't that be easier if you put it in the vise?"
"well yes but then Steele couldn't see me"
Steele looked at me as though to say 'well duh'
"um. okay"

This week I was away for a few days for work. Today is my daughter's birthday and I brought her home with me so we could give her dinner and presents. We were chatting over dinner. Ed casually mentioned that he groomed the horses yesterday.
"thank you"
"they were pretty muddy"
**pause**
"you know it's kinda soothing grooming them"
"I know, right?"

Amanda stopped chewing and looked at him.
"who are you?"
Ed looked a bit sheepish. "I don't know what's happening to me" 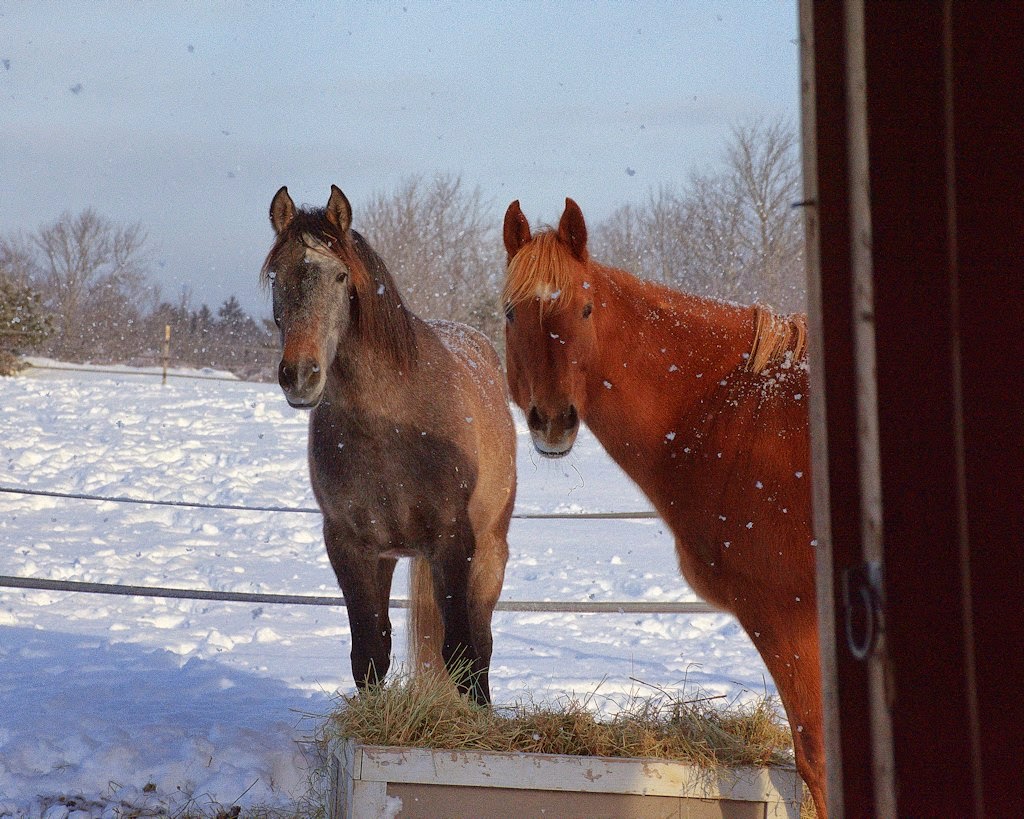