Guess what I did today?

After a long (but productive) week at work I was really looking forward to the weekend. I had all sorts of plans for Saturday. None of which involved leaving the property. I set my alarm and got up early so I could get started on my chores.

As I was having my morning coffee my phone rang. It was Royce and he wanted to know if I wanted him to come out today. I thought about it quickly and said 'yes'. He said that he'd be there in about 30 minutes so I got dressed and went out to bring in Steele. As I was walking to the barn I spied him enjoying a roll. sigh. After a good groom to get the mud off I put him in his stall to chill while we waited. It didn't take long. Steele was markedly calmer this time around. Royce started by reviewing what he covered last weekend. Steele of course showed that he remembered it all. I really enjoyed watching the two of them work together. It was evident that Steele had decided that this guy was trustworthy.

After a bit of groundwork, he put on the tack and then spent some time mounting from both sides. Steele never even moved. Then Royce began to start showing him how to walk with him in the saddle and to steer.
Steele was trying hard to figure out what was being asked and looked very proud of himself when the penny dropped.
Look at how balanced he looks.

After  a few treks around the ring consisting of walking, steering and 'whoa' it was my turn. Royce kept him on the line and I put my foot in the stirrup for the first time. I stood up in the stirrup and reached over to pat him on the neck. His ear flicked back but he stood rock still. I swung my leg over and settled quietly on his back. I was torn between glee that I was in the saddle after all this time and worry that I was going to screw it all up. As I was led around I felt like a kid on her first pony ride. Slowly I began to take over the steering. We stopped and I dismounted.

Royce asked if I wanted him to come back later and we could repeat the riding. I agreed. When he left I sent a friend a text and told her what was happening. And that I needed a photographer. She and her daughter got in their car and drove to my place. In the meantime I tacked up Irish and rode him for about an hour.

Then Cynthia and Ashley arrived, followed shortly after by Royce. We tacked up Steele who was looking a bit confused that he was going out again. A brief session of groundwork and then Royce mounted. This time Steele understood the walk forwad, whoa, back up signals. Royce even trotted him a wee bit. Then it was my turn again. I did some groundwork and then mounted. This time I did more of the steering and my brain was a bit more focussed so I could pay attention to the feel. He felt easy and comfortable as we were going around. As soon as he became alert or tense by something outside of the ring I could feel it right away. I simply asked him to turn to get his attention back of me. It was fabulous. Ashley took a ton of photos. Here's one: 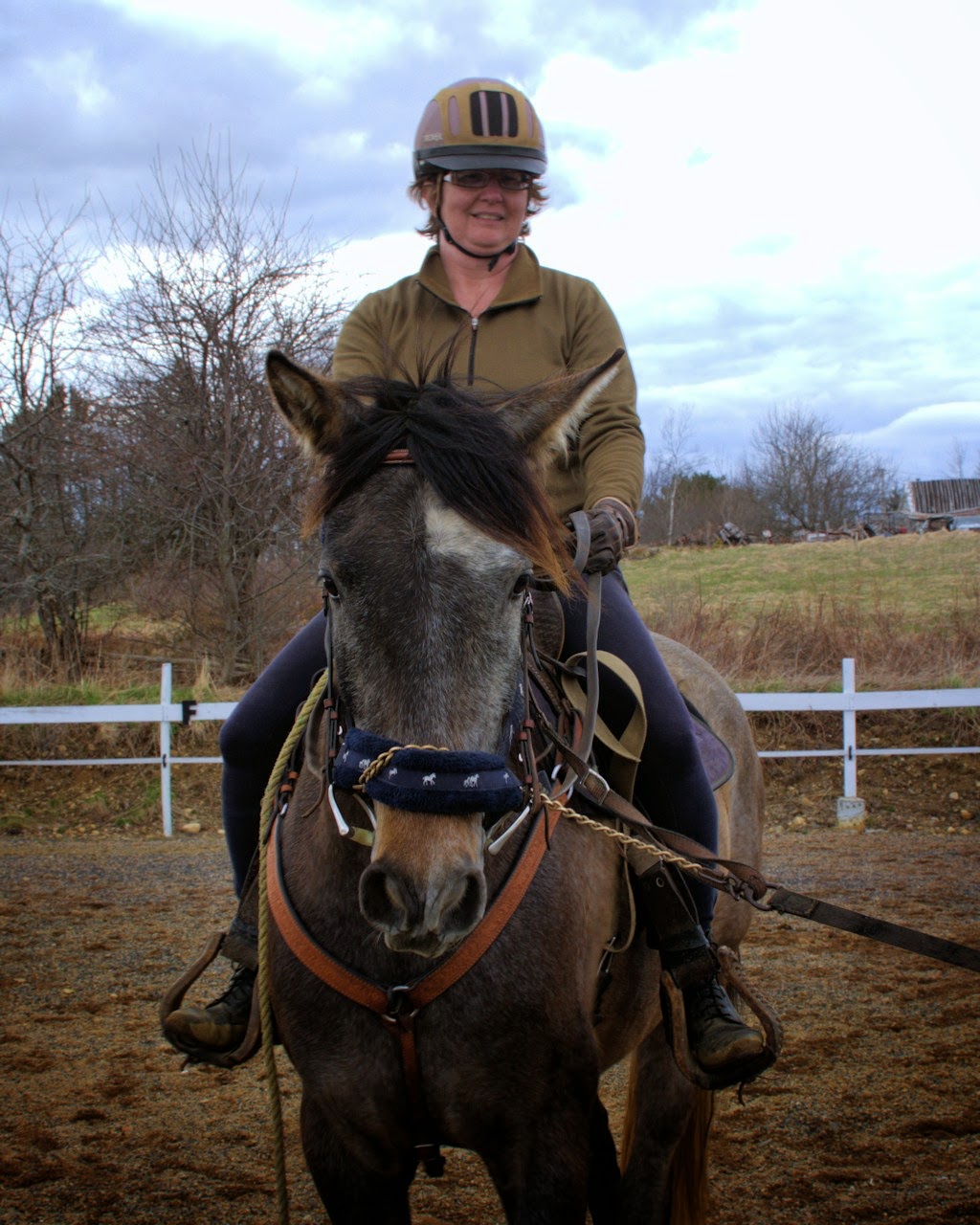 
After I put him away and fed him a well earned supper. Cynthia, Ashley and I went out to supper and it's a miracle that I didn't fall asleep into my supper like a toddler.

I have just enough strength to type out this blog post. I feel like a kid at Christmas. You know- the one who got the pony.