The Mystery of the Haunted Barn

I have a lot of things to write about and catch up on, but instead I decided to share with you some mysterious happenings at Oakfield Farms.

Back in 2010 when we bought our property we were not living in it because it needed a lot of renovations. I have shared how I knew as soon as I saw the house that it was going to be ours. While we were planning and beginning renovations we would come to the house often. Shortly after our purchase I walked into the house by myself and said 'Hi honey, I'm home!'  As soon as I said that the doorbell rang. Here's the thing: there was no working doorbell in the house. There was one that was disconnected. I did check all the doors and there was no one. I joked that the house was saying 'hello'. 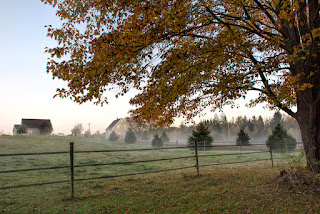 If you do believe in ghosts, our house would fall into the category of 'possibly haunted'- it's over 100 years old, people have died here (once when a barn collapsed during a hurricane according to a story I was told).

But that is all back story.

This summer, there were a few occasions where I would go out to the barn in the morning and the barn doors seemed to be closed more than I had left them. I figured I had done it on auto pilot so just shrugged it off. When we were away Joanne messaged me one day that she didn't want to worry me but one morning the doors were closed and she knew she left them open. Apparently this happened a few times while we were gone but she didn't want to worry me. She even stayed up to watch the barn one night and saw nothing.

The night Ed and I came home from our trip I noted that the doors were pretty open but it was warm so I let it go. In the morning they were about 6 inches apart.

Shit was getting weird.

Ed and I talked about it.

Was someone messing with us? Why?  Was someone sleeping in the barn? Nothing was missing or moved around in the barn. I borrowed a baby monitor and had it on every night. FYI, one of my horses snores. But other than learning about their sleeping habits, nothing happened.

It felt weird, like our property was being invaded. I semi-joked that between this and stray cattle I wanted to put up a 10 foot chain link all around the property. It felt icky.

I was away last week for work and while I was gone, Ed had the same experience of the doors being closed more than he had left them. We ordered a security camera and I hung bells on the door.

It was a mystery that made zero sense.

Then on Sunday I had Cynthia and Andrew for dinner (they had no power post hurricane Fiona). Andrew looked at the barn doors and spied something we had all missed: subtle teeth marks. Turns out it was Quaid all along.

Two year old's, amiright? In my defense, I don't really look at the inside of door because they are open or I am closing them from the outside. (I still felt like a fool).