Leap of Faith: We Try Jumping! (well sort of)

As you know I have introduced Carmen to many things in the years we have been together:
trail riding, 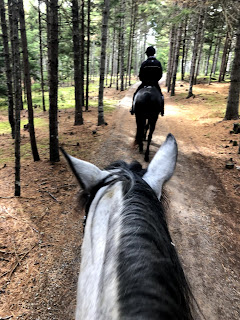 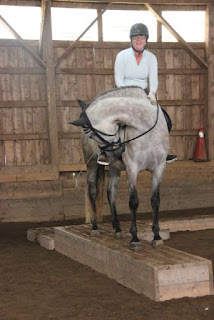 And a flamenco dress.


One thing that has been on my list is to introduce her to jumping. I realized that I am on borrowed time with the riding weather and that I was waiting for everything to be 'perfect'.

However, that was making me hesitate. So this Thursday I texted Shanea and asked "so what do you think about introducing Carmen to some jumping tomorrow? Break things up a bit". She texted back 'that would be fun!'

The weather Friday was typical October: rapidly changing from sun to cloud back to sun, windy and then a light rain shower. The last time I rode her was Monday so I brought her up early to lunge and do some groundwork.  Shanea was running a bit late which made us up there a bit longer. When I mounted she was fine at first but when the wind picked up rattling some leaves she started to come a little unglued. I actually dismounted and put her back on the lunge to make her work a little harder. She's not allowed to rip and tear but she needs to work. After a bit she settled and while that was going on Shanea set up two 'grids': 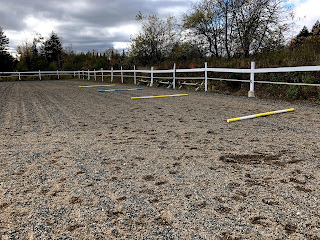 I was to pick up a canter and do each line while Shanea adjusted to make sure that the striding was right. At first she was all distracted by the leaves and trees outside the ring which resulted in her tripping over the poles.

This is part of her problem: she focuses on everything and takes no responsibility for her feet. Which leads to her tripping and then getting pissed off about it. The exercise though was simple: canter a line, circle to regroup, do the next line. Repeat.

We did a lot of cantering this lesson. Probably more than I have ever done at one time. But it worked, Carmen began to settle into a rhythm and the work. She was definitely enjoying the forward. And she began to pay attention to the poles and forgot about all the scary things.

Now before I show videos and photos,  Carmen (as far as I know) has never jumped and I haven't jumped in over a decade. So let us all agree that my posture riding a horse green to jumping and in a dressage saddle will be horrible. I tried to stay out of her way and give her the right amount of support.

It felt like at the end of each line she would surge forward and resist half-halts. It took a lot for me to get back in the saddle and bring her back. Notice Guinness in the video. I swear that he thinks he's the assistant trainer.

The clouds became heavier and I was getting tired. Shanea finally set up a small X (about 12") and we trotted up the line. Carmen saw the 'jump' hesitated and then jumped like a deer, which resulted in me hitting her in the mouth.

So Shanea dropped it to the wee teeny little X you see in the photos above. That allowed us to get back in the groove- because it was essentially a raised trot pole.


The whole lesson was so much fun and I can see how incorporating this can help us to finesse some things.

This is the last line we did. It was the best one so we ended it there.

I was so happy with how we did. It seemed to me that she really enjoyed it. It definitely was good for our confidence and trust in one another.

I doubt we'll ever be seen in the hunter ring but this will definitely be part of our routine. Maybe at some point I'll even raise it to 8 inches!!!