If I Only Had the Brain

There have been a few lessons that I have not blogged about but, rather than play catch up, I'm going to use my last lesson as an update on where we are. 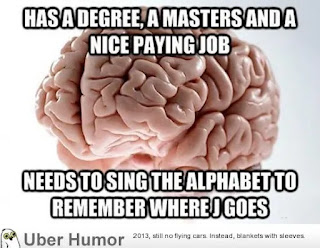 Back in mid-october, Jane began to work on us unlocking Carmen's neck. To be honest, the only thing that has been harder was getting Carmen to not spook and bolt 5-10 times a ride. In fairness to Carmen she has been able to do this for the past 7 years with me so one could argue that changing the rules was unfair.

Carmen: yeah! I'd like to make that argument. It is totally unfair.

It has been so difficult that I was beginning to think that she had a physical issue. Then one day I had Julia here and we practiced ponying Quaid. I know that Quaid had done it before but I am pretty sure that Carmen had not. We started with Julia walking Quaid beside us on a circle then I took the lead. It went well:

But what I noticed was that Carmen was flexing to the inside when Julia was beside us and even though I had both reins in one hand and wasn't even asking. So it clearly had more to do with where her brain/attention was than anything else.

To misquote Robert Frost: "The brain is a wonderful organ; it starts working the moment you get up in the morning and does not stop until you get into the saddle".

Armed with this new insight I've been working on getting the flexion, forward, rhythm and relaxation. And to be honest it's coming.  Sometimes in bits and pieces but it's coming.

It's kind of fascinating - when Carmen is still and unbending her ears are straight up. When I get her to soften and bend, her ears immediately begin to flop. It's actually really good feedback.

Our lesson started as always- with me giving Jane an update on how I think things are going. Then we begin to put the pieces together. Jane immediately honed in on my hand holding the whip. I tend to carry the whip down but it needs to be across my thigh if my hands are in the correct position. Then I couldn't drop it so that I could keep focused on having my hands correct.  It seems that my hands like to cheat a lot.

As we get Carmen flexed to the inside she's able to come into alignment. When she's focused out of the ring, her head is tilted out, her shoulder is falling in and her haunches are trailing. Add in the stiffening of the base of her neck and she is free to do whatever she chooses in terms of spooking, etc.

Carmen did spook a couple times. Each time we just regrouped and went back. There was one moment where Jane was standing close to the rail and Carmen spooked in and I thought she was going to run over Jane. '

WATCH OUT! I yelled. Jane took a step away and we regrouped.

do you need a break  Jane asked, like she hadn't almost been trampled.

So we went back to work. my tendency to ride Carmen below threshold reared it's head and Jane kept telling me to 'ride her forward' and to stop pulling on the reins. Finally I decided 'fuck it, let's go die' and began to ride her forward. Spoiler alert- we did not die.

Also, second spoiler- the work got a lot better. Jane keeps telling me that if you can activate the hind leg the brain will follow. And I believe her on an intellectual level. It's just my body and the lizard part of my brain disagrees.  Jane used the phrase "ask for more but sit slower'. I figured that she meant for me to get larger steps behind not faster.  Jane also got after me for pulling back. 'it's subtle but it's impacting her stretching out her neck'. I had to rewind the video a couple times to see it and then I was all 'sonofabitch'. So that's something to keep awareness of. I know that when Carmen shortens her neck my instinct is to pull back when I need to ride her forward into contact.

Carmen is quite happy to lean on my hands and pull me around. So Jane was asking me to ask, soften, and even give it fully to see if Carmen would carry herself. Then to slowly take it back and repeat. At first Carmen would dive but she began to soften and carry herself more which was great. I am sure that if my timing was better it would advance faster but, well, there you have it.

A couple weeks ago I was watching Jane teach and she said something that blew my mind: half-pass is a traverse (haunches in) on the diagonal line. when there was a break I asked about that and it led to me fake riding one in the ring. I then played with it with Carmen a couple times and it seemed so much easier than 'half-pass' where i think I have to shove her sideways.  It's  a bit of a mental game but one that makes sense to me. Jane had us play with that a little and it was a ton of fun. Carmen likes this work too.  here's a brief clip of our work. I do love how she looks when she's warmed up and on the muscle.

The canter was a 'mistake' but a good one in that she offered it as a way to go forward and it was a nice transition.
All in all it was a really good lesson. I felt like I rode to my full capabilities and we're making progress.
Posted by TeresaA at 6:50 PM